What is a Human Powered Vehicle (HPV)?

An HPV is any vehicle propelled by muscle power. At present conventional bicycles are the most common form, but many other designs exist and the term HPV refers to these. Benefits include greater comfort and speed.

HPVs can have two, three or four wheels. Some are augmented with electric power, but most races allow purely human propulsion. Typically an HPV features a seat with backrest (rather than a saddle), which is often reclined – as with a recumbent bicycle. However, there are many varied configurations: for example practical designs which can supplant single-occupancy cars, low racers built for speed, or cargo carriers ideal for local deliveries.

Many boats and even some aircraft are human powered, but our primary focus is land vehicles.

The EHPVA is a platform for the exchange of information and for consultation between clubs. It is not a formal organisation – there is currently no board and no financial contribution required. If you would like to participate please see the ‘Looking Ahead’ section below.

National clubs with magazines share them within the EHPVA, so compiling those magazines becomes easier. Furthermore, by collecting content from as many countries as possible, our eMagazine “EuSupino” is created at the end of each year. This free publication widens access to news and interesting facts about HPVs. Download your copy here.

Records and races are validated by the World Human Powered Vehicle Association (WHPVA). The EHPVA intends to complement rather than duplicate activities of the WHPVA.

The EHPVA is not affiliated with any political party. 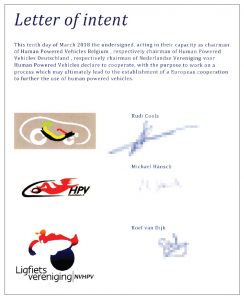 The EHPVA originates from a letter of intent signed in March 2018 by Roel van Dijk, Michael Hänsch and Rudi Cools – respectively the Chairmen of the Dutch, German and Belgian HPV clubs at that time. This brief document declared their intention to cooperate together, with the purpose of furthering the use of HPVs. Their letter also proposed wider European cooperation.

A few weeks later at the annual SPEZI show in southern Germany, there were discussions between members from several national clubs about taking forward the idea of a European HPV Association.

During the HPV World Championships in England, July 2018, a meeting was convened which included representatives from Austria, Belgium, France, Germany, Italy, Netherlands, Switzerland and of course the UK hosts. Contact was also established with the Ukrainian HPV Club.

There is an annual meeting of representatives from national clubs in April (during SPEZI, see above) and our eMagazine is published on this website during December. The HPV World Championships are another opportunity for face-to-face meetings.

Due to COVID-19 the 2020 annual meeting was held online. Minutes of this meeting will be published here in due course.